From the Komodo dragons of Rinca and the marine life of the Wakatobi National Park to the seabird colonies of the Banda Sea and the nutmeg forests of the Banda Islands, this exceptional 12-day cruise with Gert de Jong will introduce you to abundant wildlife above and below the water, masses of seabirds, remote island cultures and the illustrious history of the spice trade as we voyage through the islands and seas of the Coral Triangle, home to some of the most diverse marine life on the planet.

Indonesia’s remote and uninhabited islands support regionally and globally important breeding colonies of at least 15 seabird species. Colonies are usually situated on islands, cliffs or headlands, which mammals have difficulty accessing. Seabirds are a vital component of the marine ecosystems of the Banda and Flores Seas, and their presence serves as a good indicator of the health of the wider marine ecosystem. The Banda Sea is also a major migration route for many whale species, which we hope to encounter en route. In the company of Gert de Jong, an inveterate seabird expert who is looking at ways to protect the last remaining seabird breeding islands of Indonesia, you will have the opportunity to participate in a conservation project aimed at recording the numbers of frigate birds, boobies and terns on the islands of Kakabia, Moromaho, Manuk and Gunung Api.

This is a cruise group tour, with a fixed itinerary and scheduled start dates. 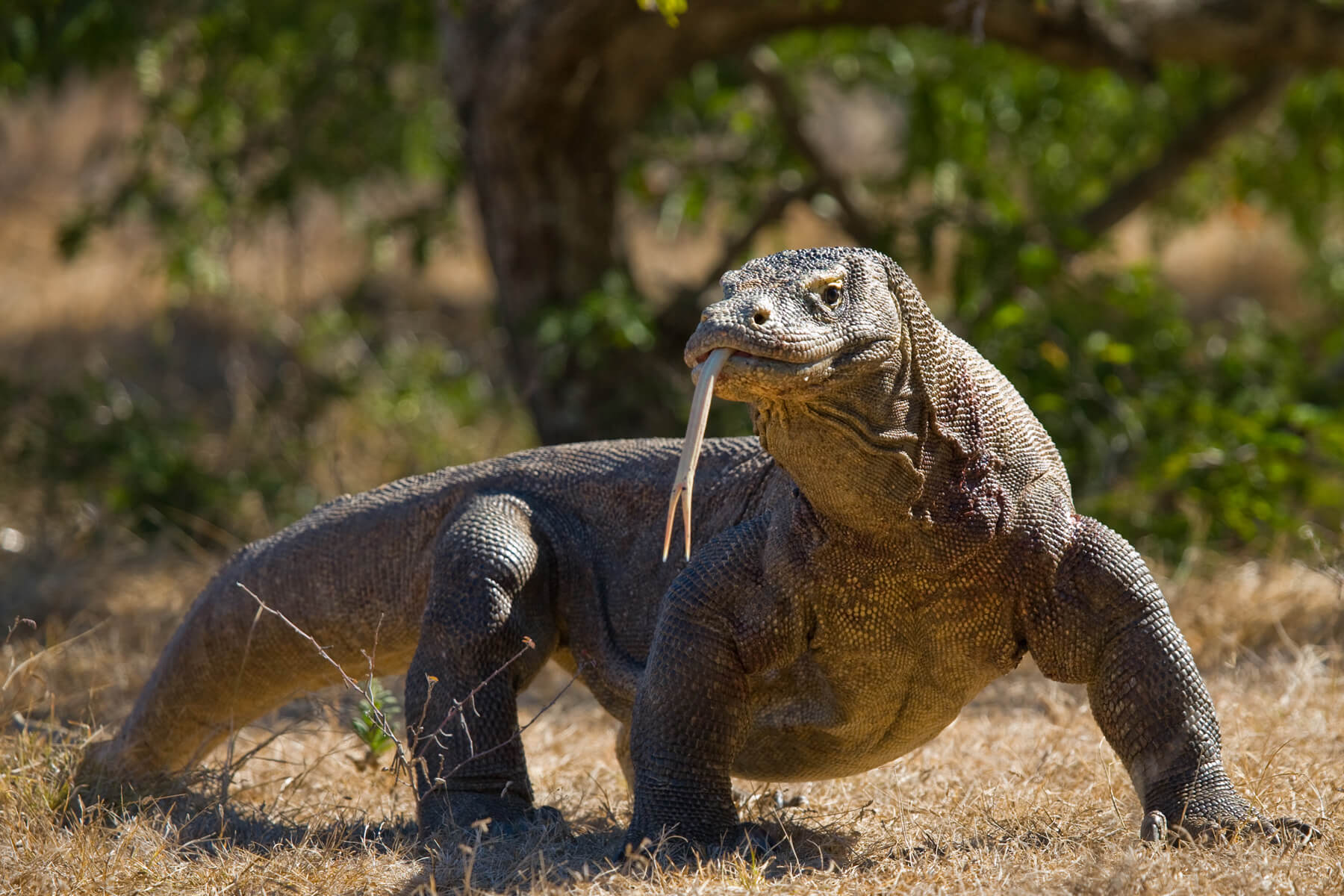 Welcomed by the Ombak Putih at the harbor when you arrive in Labuan Bajo. You can get acquainted with the crew & other passengers over lunch while we cruise to the Island of Rinca in the heart of the Komodo National Park. Started by Loh Buaya, we will set off nature trek searching for Komodo dragons as the indigenous creature to this island. However, you will also spot other animals like wild buffaloes and some endemic birds as well. There, unwind yourself with a breathtaking view from the top of the hills before swimming and snorkeling in a quiet spot. Then, we will head to the northeast to Bonerate Island. Meals Included : lunch & dinner 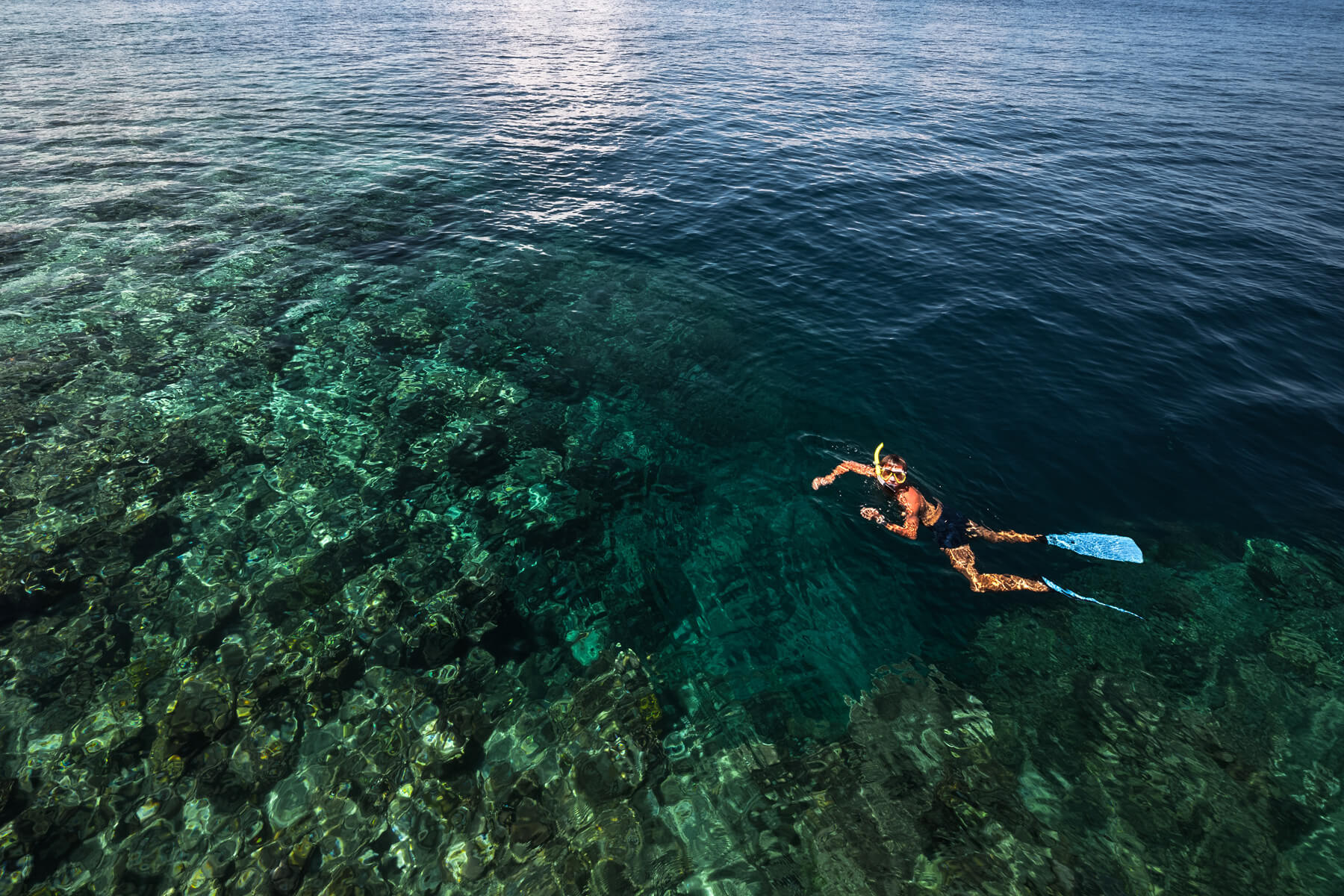 Find yourself waking up in the middle of the Flores Sea, Bonerate. Here, we will visit the main village with its sandy streets and houses built on stilts in typical Makassarese style. On the beach, we may be able to observe the construction of the elegant Lambo boats. Afterward, we can swim, snorkel and enjoy the beautiful beaches and reefs at the northwest side of the island. Later, we will continue cruising in a northeasterly direction for Kakabia. Meals Included : Breakfast, lunch & dinner 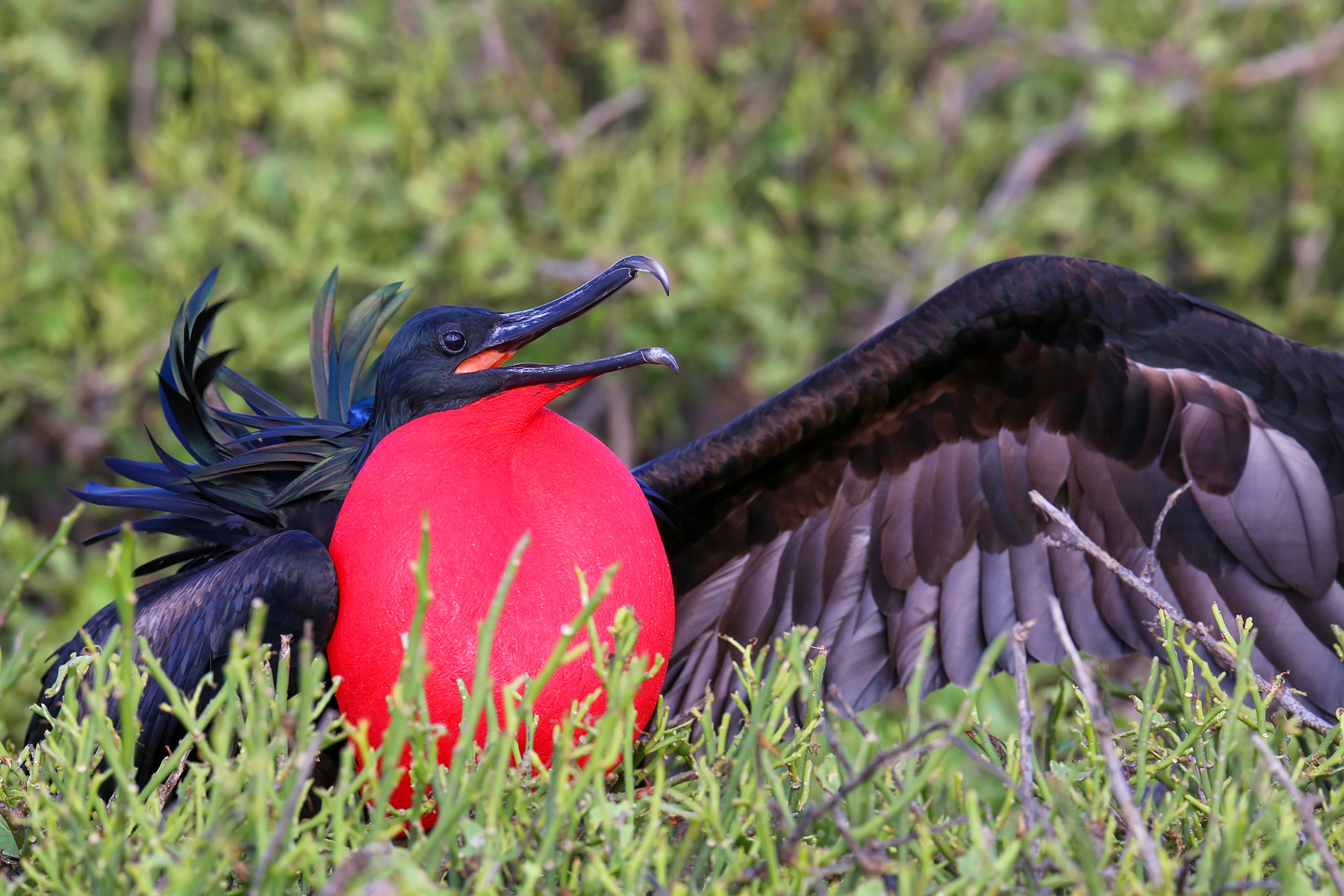 Today, we will drop anchor off the little Island of Kakabia for a day of bird counting, exploring, swimming and snorkeling looking out for sea turtles and dugongs. We will take the tenders and go ashore, and we can expect to see frigate birds and red-footed boobies. Meals Included : breakfast, lunch & dinner 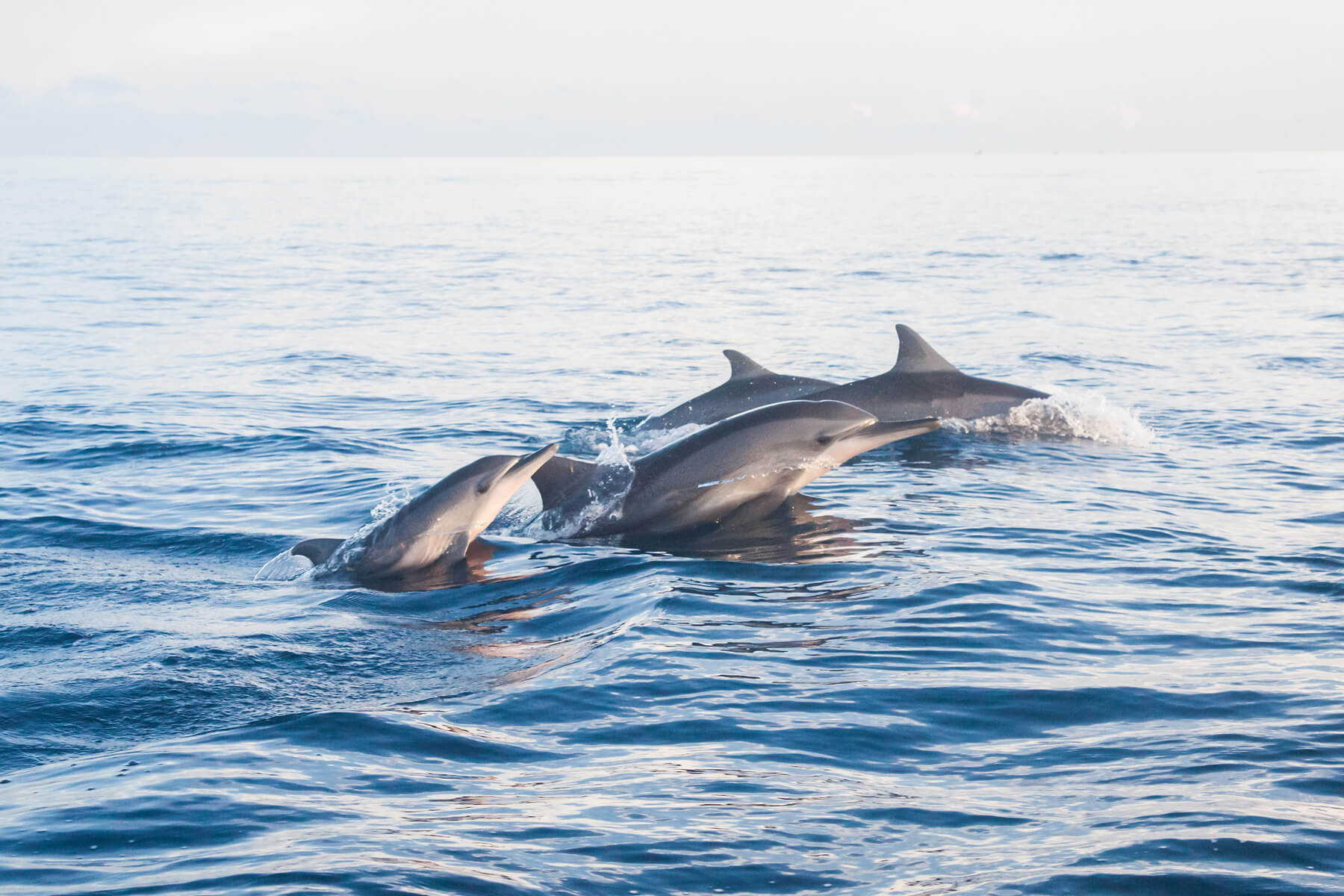 Day four heralds our arrival in the Tukang Besi archipelago, also known as Wakatobi, which is world famous for its pristine coral reefs. We will have two days to wander around this We will be having two days wandering around Tukang Besi archipelago, also known as Wakatobi. This place is renowned for its pristine coral reefs that inhabited by a tribe of daring seafarers, shipbuilders and maritime traders. We will visit Wakatobi National Reverse, where we should see pods of dolphins and probably get a chance to see pilot whales, sperm whales or even the rare beaked whales! We will also watch local blacksmiths at work high up on steep rock plateaus, visit local markets, and, oh! We will have a perfect beach barbeque in the most quintessential spot in Wakatobi. In the evening, we will depart for Moromaho Island. Meals Included : Breakfast, lunch & dinner 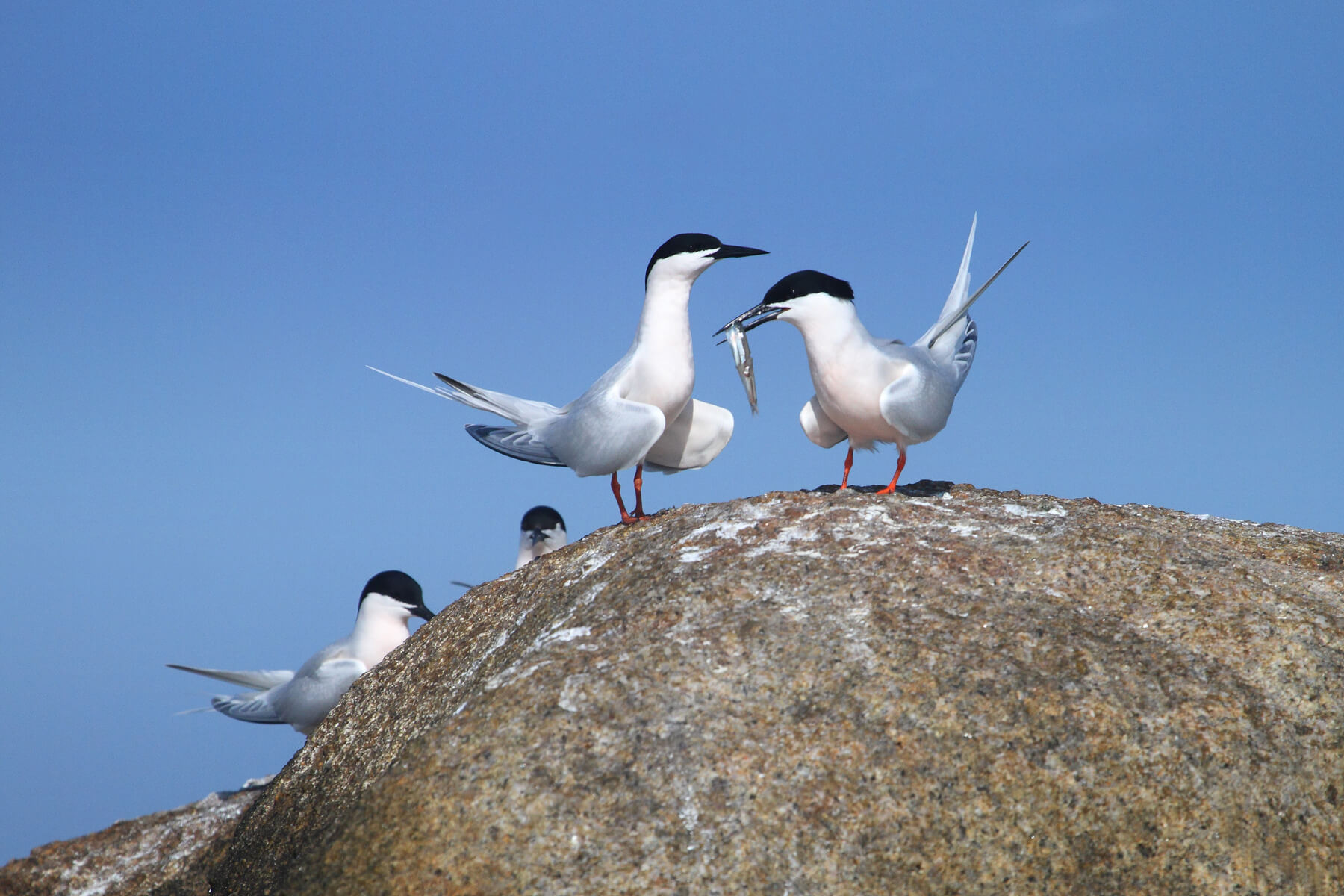 Wake up beautifully with the view of stunning Moromaho — a coral island surrounded by an expansive reef that can only be crossed at high tide on a small boat or kayak. We can swim, snorkel, bird watch and bird count (we should see parakeets), and there is a stable colony of breeding red-footed boobies and roosting great frigate birds on the island. Several species of migrating shore birds from both Asia and Australia winter here; the island is a breeding ground for green turtles, and there are also megapodes breeding here and small fruit bats. In the afternoon, we will embark on our longest leg of the cruise, our journey to Gunung Api in the middle of the Banda Sea. Meals Included : breakfast, lunch, & dinner 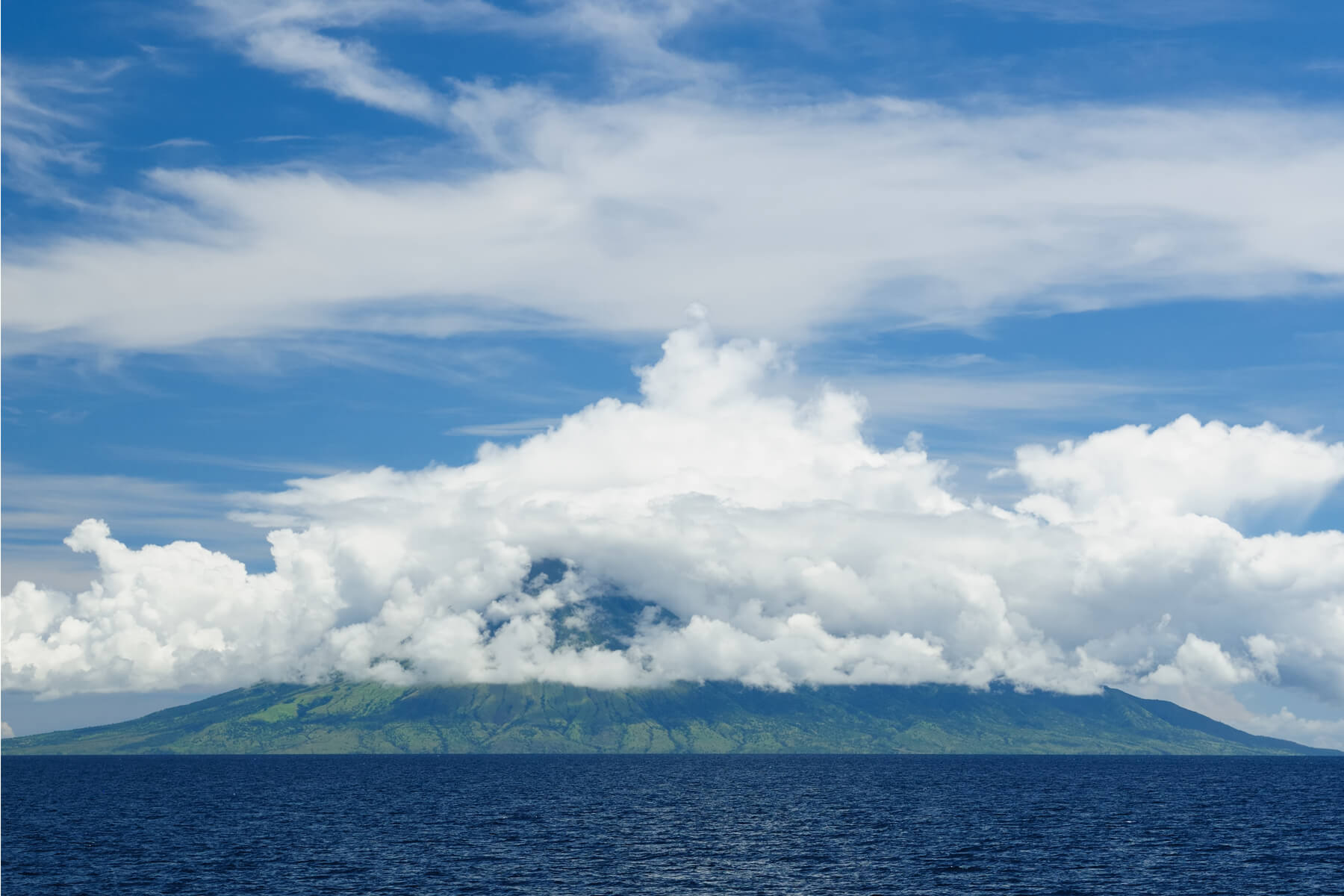 Two days here to get closer to the volcano named Gunung Api, that sits alone in the middle of the Banda Sea. Gunung Api which quite simply means ‘fire mountain.’ This volcano is a huge, four-kilometre-high seamount, but almost all of it is submerged, and we will only see the top 300 metres above the surface. The volcano is active, with smoking vents around the crater. Gunung Api is also home to many species of boobies, shearwaters, frigates, red-tailed tropic birds, and home to a multitude of banded and olive sea snakes. Therefore, we will have a great time watching and counting those varieties of birds. Although the volcano is inaccessible, we will still circumnavigate the islands in the tenders and see this pristine and unspoiled biodiversity. The two days that we spend here will be very relaxing for swimming and snorkeling while enjoying the tropical sun. Towards the end of the second day, we will depart to the Lucipari Archipelago. Meals Included : breakfast, lunch & dinner 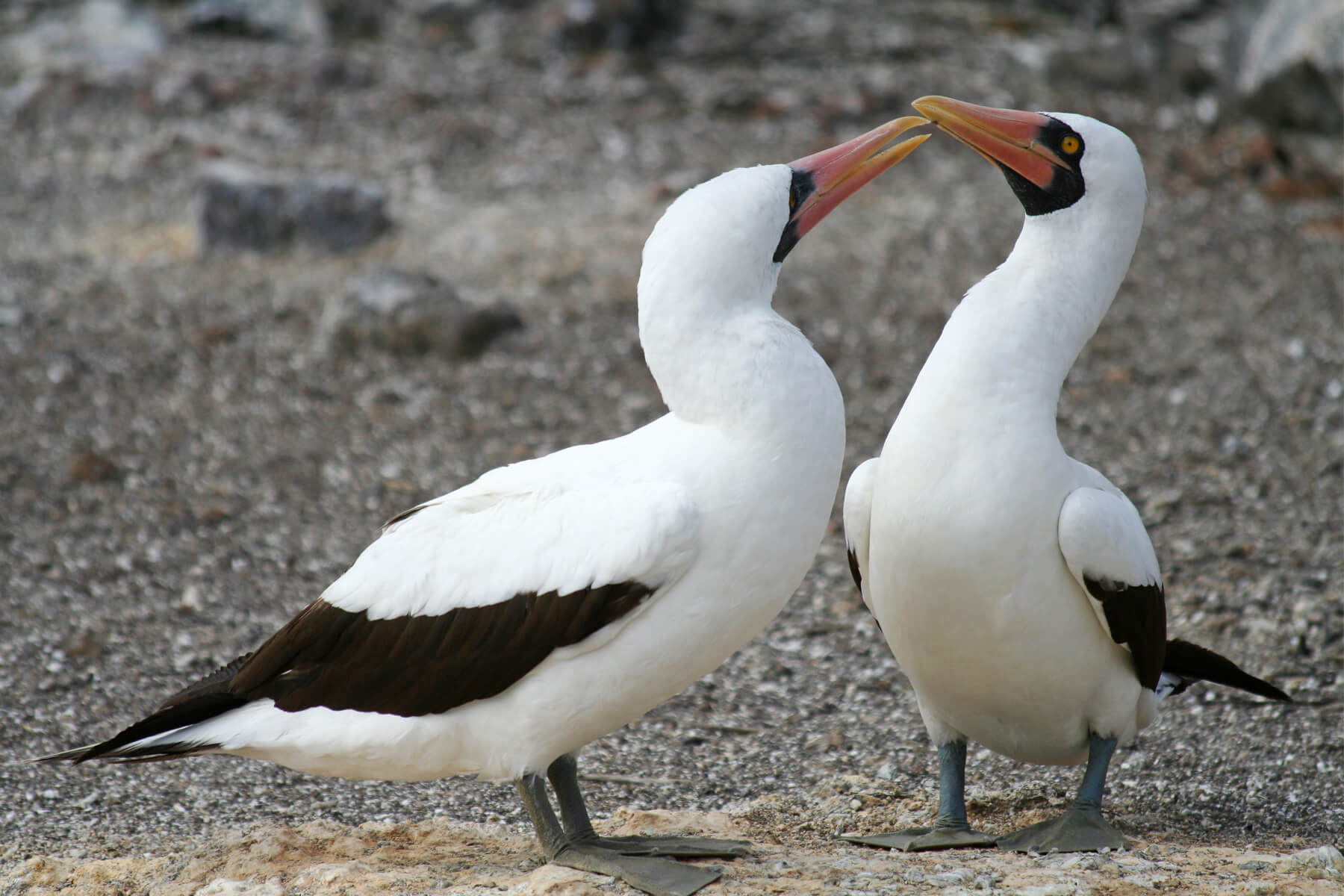 The Lucipara Archipelago consists of a group of four uninhabited wooded islands that occasionally visited by fishermen from Buru and Ambon. These volcanic outcroppings in the northeastern part of the Banda Sea are populated by terns, spoonbills, orange-footed scrub fowl, the Nicobar pigeons, as well as salamanders, crabs, and butterflies, all are living in perfect harmony with an apparent absence of fear, reminiscent of the Galapagos. We will spend some time wandering and pondering this impressive secluded space. Meals Included : breakfast, lunch & dinner 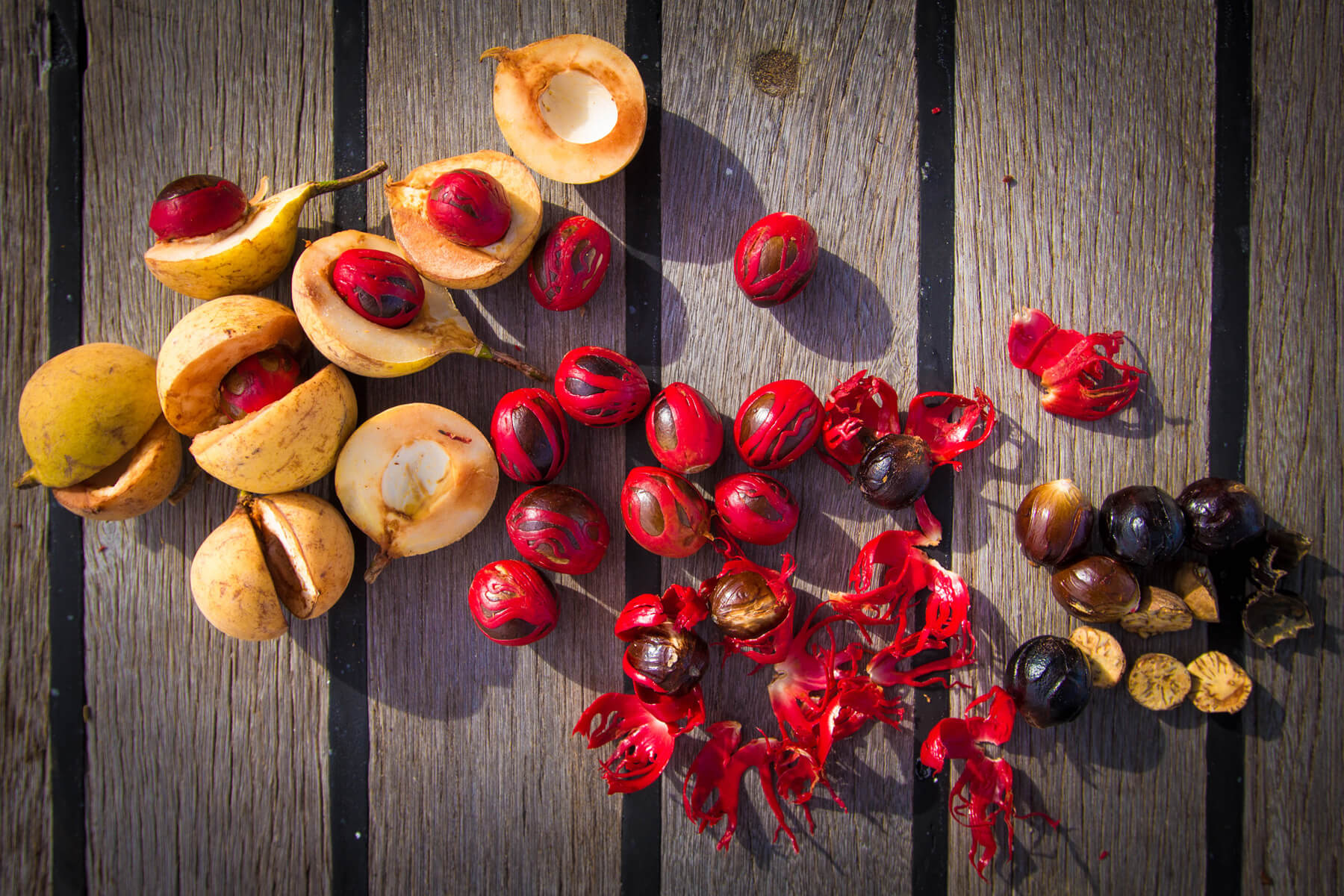 The ninth day of our trip will be full of historical excitement as we are going to visit the renowned Banda Archipelago. We will figure out the beauty and cultural heritage of the island along with its well-documented history regarding the world’s source of nutmeg and mace that once only existed in Banda. In the 15th and 16th centuries, the demand for the aromatic nutmeg, which was believed to be a cure for the bubonic plague, inflicted colonial empire that sold them in a price worth more than its weight in gold. Despite their illustrious and well-documented history, the Banda Islands are a place that time seems to have forgotten. Today they retain an aura of mystery, allure and astonishing remoteness, with a quiet colonial ambience and an exceptional biodiversity that makes this destination truly special. We will anchor in a sheltered bay off Gunung Api and then go by tender to visit Banda Neira, the major village in the Banda's. Last, we will be strolling through the ancient town visiting Old Fortresses and admiring plantation mansions from the past. Meals Included : breakfast, lunch & dinner 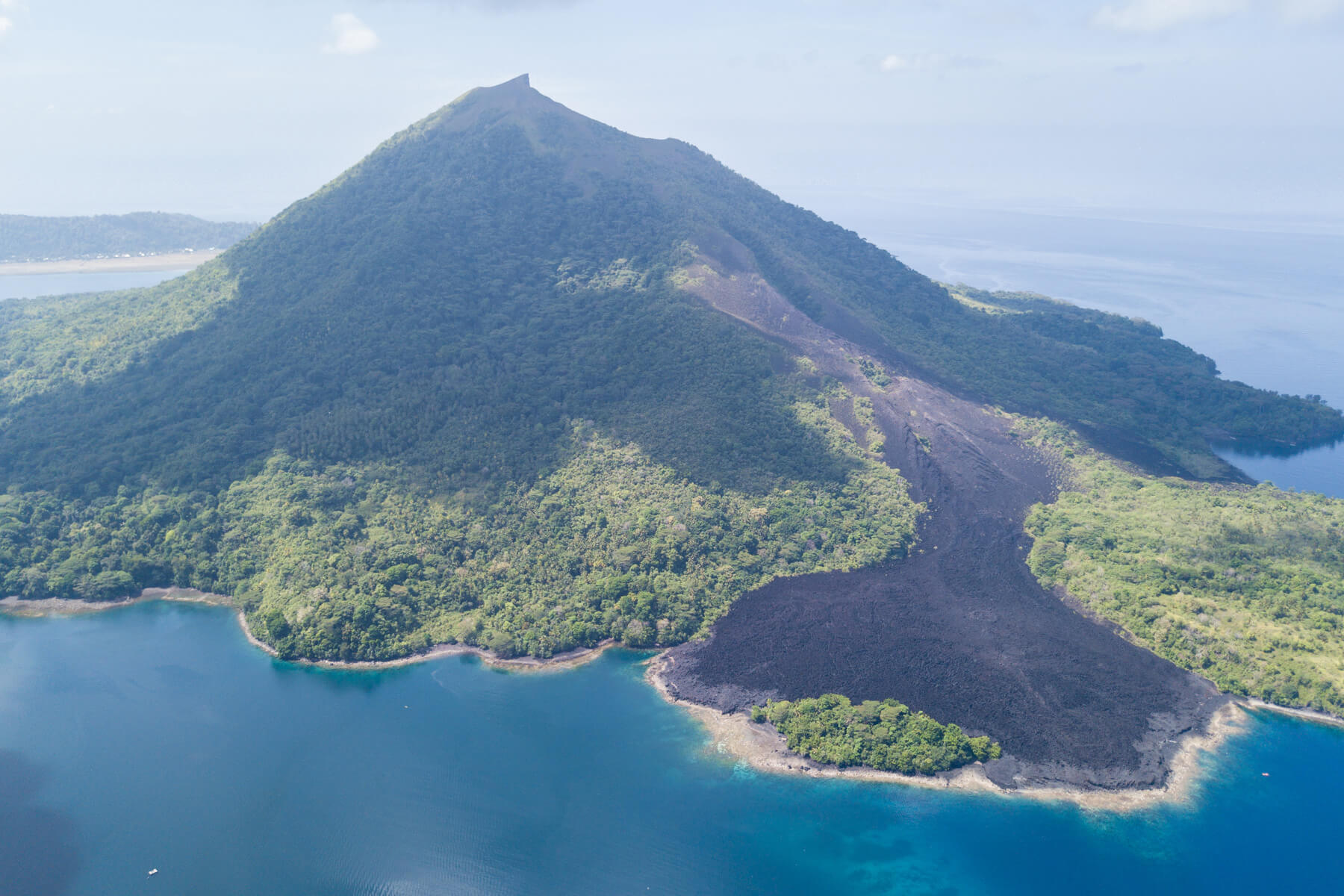 These two days will be filled with visits to a few of the other islands in the group, the tiny Island of Run as well as the Islands of Ai and Hatta where we will see what remains of the Dutch colonial houses and land parcels known as ‘perken’ that were handed to Dutch planters – ‘perkeniers’ – to manage. We will see more forts, as well as churches, cemeteries and nutmeg plantations. Being in the middle of the Coral Triangle, we will also have several opportunities to explore the pristine waters and bountiful reefs of the islands. We invite the fit and ambitious to make an early morning ascent of Banda’s Gunung Api volcano, the most famous of the Banda Sea ‘Ring of Fire’. While this is a challenging climb up a narrow track to an elevation of about 640 metres, the reward when reaching the top of the ‘Fire Mountain’ is well worth the effort and you can revel in a stunning and unforgettable view. When it is time to depart for Ambon, we will navigate through the ‘Sonnegat’ (sun’s gap) between Banda Neira and Gunung Api under the escort of a ‘Kora-Kora’ sea canoe that once was used in ancient times to attack the invading colonists. Meals Included : breakfast, lunch & dinner 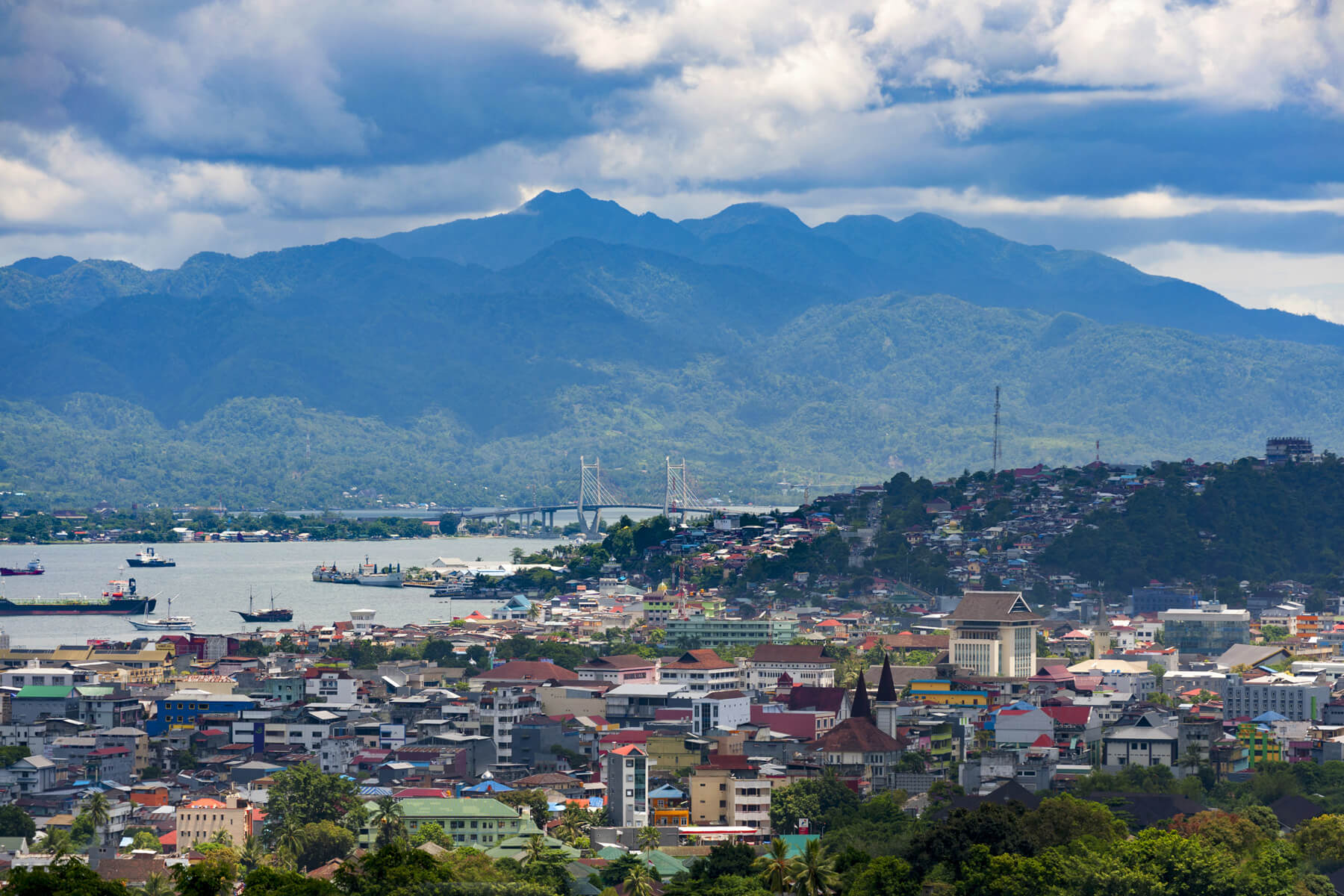 After an early morning arrival in the Bay of Ambon, we will have a short sightseeing tour of the city, and we will visit Fort Victoria, another fort dating back to colonial days. We will then say farewell to the captain and crew of the Ombak Putih before being transferred to the airport for our onward journey. Meals Included : breakfast

THE EXPERT'S ADVICE
In addition to leading the monitoring of seabird habitat, searching for dugongs, spotting whales and other endemic wildlife, Gert will be giving a series of lectures, talks, briefings and showing a couple of short films over the course of the cruise on the following topics :

Cruise - Live on Board

Each of our itineraries is here to inspire you. We use them as a foundation for your bespoke trip or design your trip completely from scratch based on your requirements. Contact us with your holiday's ideas, no matter how big or small, our travel specialists will start planning a unique and personalized trip just for you. 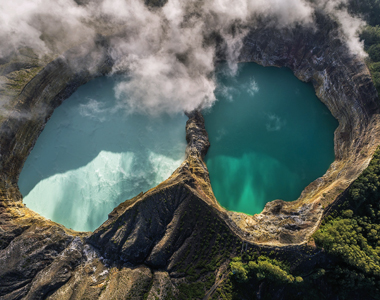 Maumere I Moni I Riung I Bajawa I Ruteng I Komodo

Discover the quirks of a land blessed by Mother Nature and unspoiled by the hands of men. Flores is attracting an ever-greater number of traveler’s with it’s natural wonders, exotic culture, active volcanoes, prehistoric riddles, hidden beaches, and underwater beauty. 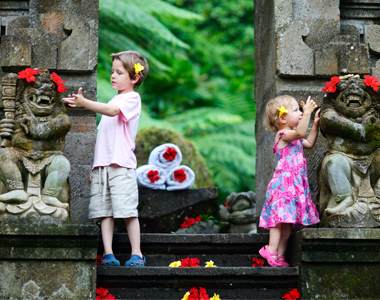 Kuta I Nusa Dua I Canggu I Ubud I Bedugul, Bali

A trip sets for a family with kids under ten years old that brings a perfect entertaining journey covered with an educational ambiance to the little ones. 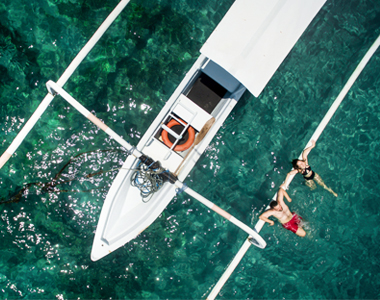 Ubud I Kintamani I Buleleng I Canggu I Uluwatu, Bali I Gili Islands, Lombok 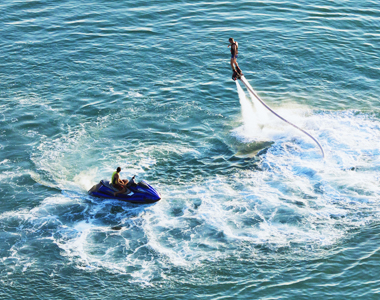 Canggu I Uluwatu I Seminyak I Nusa Penida I Ubud, Bali

Fun activities, Instagram-able spots, unique restaurants, and the coolest place in Bali right now will be your loyal companies on this Active Bali: Hikes, Bikes, and Water Sports tour.